Sprinkler systems may be our best choice in the struggle between fire, life safety, and property protection, but water damage, happening on, or shortly after, a cold winter day, can be very expensive for property owners and occupants, and need not involve a fire.  There are a number of factors that can contribute to a weather related large water damage loss.  The building enclosure, some of the building’s mechanical systems, the homeowner or occupant, the sprinkler system design and installation, and the choices made by the design team (architect, fire protection engineer, mechanical engineer, design/build general contractor and so on).  Any one of these variables, alone or in combination, may lead to a large water damage loss – See Figure 1.  This article has not included manufacturing or fabrication problems or installation mistakes that are possible with sprinkler systems and their components.  Those can also contribute to or facilitate a loss, especially if some of the other factors are present. 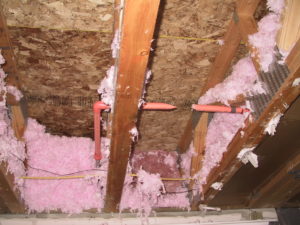 The weather can become a factor any time temperatures are below 40°F (4°C) and water is present, because the possibility of freezing exists.  The length of exposure to temperatures below 40°F (4°C), the chemical content or makeup of the water, whether the water is moving or not, and so on definitely affect the potential for freezing.  As the air temperature goes down, and the wind speed picks up, the potential increases significantly.  Low temperatures below -20°F (-29°C) are not uncommon between November and February in many parts of the northern United States and Canada.  Actual air temperature extremes, not to be confused with wind-chill temperatures, can go below -40°F (-40°C).  Table 1 shows temperature and wind speed data for a winter day in a Minneapolis, Minnesota suburb where at least one sprinkler system break occurred. If the design of the building and sprinkler system has not been based upon these minimum temperatures and if the designers and installers of the sprinkler system, the building enclosure, and the insulation are not appropriately protecting water-filled pipes, then there is a high probability that a water loss will occur sometime during the life of that building.

The integrity of the building enclosure is another factor.  Air filtration due to the wind or a negative mechanical air flow design, the use of permeable building materials, or cold penetration through unsealed exterior openings are some of the possible avenues for cold air to reach water filled piping. Exterior materials such as stucco provide a better seal to air infiltration than bricks or concrete blocks, for example.  The use of caulk for all exterior penetrations will seal penetrations from air infiltration as long as the caulk remains viable.  Using a foam spray-on insulation on rim joists may produce a much better seal against air infiltration than does batt-type fiberglass or blown-in insulation.  These factors or combinations of these factors may increase or decrease the probability of cold air reaching water filled pipes.

The design and installation of mechanical systems and equipment such as those for heating and ventilating can be a factor.  Often these systems are designed so that buildings are operating with a neutral or slightly negative air flow.  Simply put, slightly negative means that the mechanical system is designed so that a small amount of outside air is being drawn into the area or building.  This negative air flow can increase as kitchen and bathroom exhaust fans are used, for example, and it includes the air intake for the furnace (the furnace intake air pipe alone can bring cold air into the building envelope every time the furnace operates) or other heating equipment.  If water filled pipes are located in close proximity to these air intakes, the possibility of water freezing increases.  Improperly sealed openings, cracks in the exterior enclosure, porous building materials not only can allow wind driven cold air into the building, but also increase the flow of cold air drawn in by the negative mechanical system design further increasing the potential for freezing of water filled piping.  In large buildings the balancing or incorrect balancing of mechanical systems can also contribute to or increase the negative air flow.  The cold air, being blown by the wind, drawn in by negative system design or exhaust fans, or a combination of these, will seek the area of least resistance, and if a water filled pipe is in the path (even in a ceiling or floor space that has been blown full of insulation, but not sealed from the exterior exposure), that cold air will eventually freeze the water.

The homeowner or occupant may contribute too.  A failure to perform necessary inspections, testing, and maintenance on systems is one example.  If they have water filled sprinkler systems (as compared to dry sprinkler systems or antifreeze solution filled sprinkler systems) the required inspection, testing, and maintenance is minimal.  However, if the water filled pipes are near exterior walls or in the attic, the occupants must be sure to maintain the integrity of the barrier (insulation, caulking, vapor barrier) necessary to protect the water filled piping, between the freezing temperatures and the warmth of the occupied spaces for the life of the building.  If any portion of the water filled sprinkler system is installed in the attic, owners must always be sure that anyone that enters the attic (cable installer, electrician, (building occupant) do NOT in any way disturb the insulation or any enclosures that may have been built to protect the piping.  If enclosures have been built around sprinkler piping, the integrity of the enclosures must be maintained over the life of the building and that includes any plastic, foam, or caulk that may have been included in the enclosure design.

The owner also has to be sure to maintain the minimum air temperature that the building was designed for throughout every area that a sprinkler system (or domestic water pipe) might be installed in.  If the owner or occupant chooses to set the thermostat back to 55°F (12°C) for example, for a period of time, they need to realize that does not mean the building will be at 55°F (12°C) everywhere.  A thermostat setting of 55°F (12°C) only means the air temperature at the thermostat will be at or near 55°F (12°C).  Other locations near exterior walls or concealed locations may be significantly colder and if the air temperature is low and any of the previously indicated air infiltration events occur, or insulation isn’t the proper depth, and/or it’s windy, freezing of water within the sprinkler system components can occur.

The design and installation of the sprinkler system also enters into the possibility of a large water damage loss caused by the freezing of the water in the system.  Sprinkler piping designed and installed in the insulation in unheated spaces either between floors or in the attic allows the insulation to insulate the water filled pipe from the heat of the building.  Combine those water filled pipes with dry type sprinklers that may be a part of the design and are also installed in the insulation, but protruding through building walls to the exterior, and you have pipe and components that are insulated from the heat and potentially exposed to cold temperatures and wind.  Any combination that allows the rate of the heat loss to exceed the rate of replenishment of the heat (or the transfer of cold temperatures) through the pipe, or the infiltration of cold if the enclosure (building or pipe) is not tight, can lead to freezing and water damage.  Sprinkler piping designed or installed in close proximity to exterior walls, in any combination with the factors delineated in this article, may increase the possibility of water filled piping freezing during extreme weather conditions.

The choices made by the design team during the building design can reduce or increase the probability of freezing the water filled pipes.  For example, eliminating sprinklers in combustible concealed floor spaces by filling those spaces with non-combustible insulation in accordance with the National Fire Protection Association Standard 13, Standard for the Installation of Sprinkler Systems, may reduce sprinkler system costs.  However, this choice may not ensure that adequate heat will be available for any water filled piping installed in those insulated spaces and may increase the possibility of freezing the water filled sprinkler system piping.  The piping installed in those concealed ceiling spaces may be supplying dry type sprinklers that have been installed to protect below balconies and decks or the piping may supply sprinklers in other areas or on other floors.  See Figure 2. Additional choices that the design team makes include the design of the mechanical systems (negative air flow previously discussed), location of thermostats, location of heat vents and return air grilles, building enclosure materials, insulation methods, and so on.

In buildings of combustible construction, where the ceiling space of tuck under garages (that is actually the floor space for the occupied floor above the garage) is used for sprinkler or domestic piping, the garage must be heated to avoid or minimize the possibility of freezing the water in the piping – see Figure 1.  Other design team choices relative to sprinkler piping are the location of dryer vents, the location of intake air ducts for fireplaces and furnaces, the location and size of soffits near exterior walls, and so on.  All of these have the potential for combining with water filled pipes and contributing to the freezing of the water.

The freezing of water in sprinkler system pipes does not always lead to a failure of the sprinklers, pipe, or fittings.  The probabilities are fairly good that when the water freezes it will cause a component failure, and the chance of failure increases as temperatures decrease and the time the component is exposed to freezing conditions increases.  Another type of failure mode is the formation of ice plugs.  An ice plug in a sprinkler pipe during a fire is not a desirable situation either.   Ice plugs form in wet and dry sprinkler systems when water or moisture freezes, but the freezing does not break the pipe or fittings.  Ice has been found, documented, and removed from pipes (see Figure 3) with no apparent physical damage to components; however, the ice itself becomes or became a detriment to the operation of the sprinkler system in a fire condition. 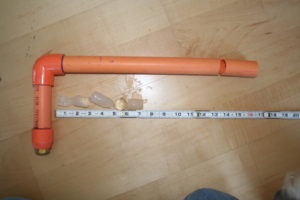 There are many factors that can lead to water damage from the failure of a sprinkler or domestic water system caused by the cold weather.  To minimize the potential, close coordination and significantly better communication is necessary from building design concept through construction and beyond.  This coordination and communication is not one way.  It has to include the design team, the general contractor, the insulation contractor, the mechanical contractor, and the sprinkler contractor.  Ultimately, owners and occupants need to be brought into this, too.  If the occupants think they can set their thermostats back to 55°F (12°C) or colder in the winter, they need to take all of the building design criteria into account.  Another scenario would be for the design team to supply the owners and occupants with information regarding minimum temperature settings, and the relation of those settings to actual temperatures throughout the interior of the building.

ABOUT THE AUTHOR: Scott A. Futrell, PE, FSFPE, CFPS, SET, CFEI, is a fire protection consultant with Futrell Fire Consult & Design, Inc., in Osseo, Minnesota and has over 40 years’ experience designing, specifying, and investigating fire protection system related losses. He is a Fellow in the Society of Fire Protection Engineers and co-author of “Designers Guide to Automatic Sprinkler Systems”, available from the Society of Fire Protection Engineers.