Fire protection systems that are designed, installed, inspected, tested, and maintained properly are exceptional tools to protect lives, property, and the fire service.  Losses, large and small, from fire or water damage, accentuate that these systems are not designed, installed, and maintained in accordance with the minimum requirements of the fire codes and associated nationally recognized standards.

The National Fire Protection Association (NFPA) collects data and issues statistics on fire in the United States on an annual basis, but that document does not include all of the fire protection system failures (such as water losses) or all of the fires that occur across the country.  This is not an accusation of NFPA because they include what is reported, but if these incidents aren’t reported, then NFPA doesn’t know about them or include them in their reporting. Based on this, quoting or otherwise using the statistics from NFPA regarding system failures does not yield the entire picture.  For example, NFPA only reports the unintended operation of automatic sprinklers when that occurrence is reported to NFPA or appears on a fire service report, such as National Fire Incident Reporting System (NFIRS). These unintentional sprinkler operations are rarely reported, recorded, or investigated.

This information is important because fire protection contractors create or cause, whether directly or indirectly, many of these failures with little if any repercussion. There are far too frequent examples of water losses, sprinkler system freeze ups and fires with more damage than should be expected if you look at the statistics alone.  Fire sprinkler contractors, fire alarm system contractors, and monitoring companies are all responsible; it is not limited to one or the other, and often there is a combination of all of them.  Property owners and managers can be responsible too, but generally they know little about the fire protection systems and don’t hold themselves out as experts like the contractors they are hiring.

Many of these statements can be shown from a recent water loss used as a case study.  In addition, this case study indicates how easy it is for the responsible contractor to avoid any repercussions when in reality they are the only entity responsible for the loss.

I was contacted to investigate a water loss in a two-story residential building that was more than ten years old and involved the failure of a dry pipe sprinkler system in the attic.  In this loss, the alarms worked as intended but water in the dry pipe sprinkler system froze and broke in several locations. Following the loss, an insurance adjuster called the sprinkler contractor that often worked on the this particular system and told the contractor to repair it without investigation or documentation.  The contractor removed and replaced several of the smaller pipes (branchlines) from the attic, but instead of recycling the broken pipe and fittings the sprinkler contractor left them outside the building, on the ground, in the snow. See Figure 1 below.

When I arrived some days later I found the pipes and retained them.  The investigation revealed that the sprinkler system piping was experiencing corrosion related issues and had been for some time.  The same contractor had replaced pipes one-at-a-time and then submitted a proposal to replace all of the larger piping (the mains). For some reason the contractor replaced all of the main piping except one length of main.  That in itself is a problem because the contract was to replace it all of the existing mains, but they did all but one twenty-one foot piece.

After the contractor replaced most of the mains, water in the dry pipe systems froze during the first cold weather of the season.  Several pipes and fittings broke. How could this possibly happen?

In this case study, the contractor did not suggest that anything needed to be done with the smaller piping (branchlines) in the sprinkler system – the parts I found in the snow and retained.

When a sprinkler system experiences corrosion, the debris (or pipe scale) that is the product of corrosion falls to the bottom of the pipe, and every time water enters or flows through the system the debris or pipe scale is pushed further into the system from the larger mains deeper into the smaller branchlines. See Figure 4 below.

In this case, when the insurance company decided not to pursue subrogation, I sent a release of evidence form and the evidence was released to be destroyed.  I immediately cut the pipes in small pieces and found the debris and pipe scale that had formed sludge in these smaller pipes and over time the pipe scale had solidified.  It is this sludge that created the dams necessary for water to be trapped in a dry system causing the failure and loss.

The sludge in this case caused the residual water from fire suppression testing in the sprinkler system to freeze and break pipes and a water loss to follow.  This system failure / freeze failure / water loss wasn’t reported or recorded by anyone. More importantly, had there been an actual fire this same sludge could easily have caused the sprinklers to be blocked, the system flow to be obstructed, the amount water necessary to control the fire to be reduced, or any combination of these, leading to a larger fire loss than should have resulted. Fire losses resulting from this type of blockage, while rare, are not uncommon.

The pictures in Figure 2 show a patch on a pinhole (this is not an appropriate repair for a sprinkler system but was completed by a licensed sprinkler contractor) and the external corrosion that is indicative of internal corrosion as well as end-of-the-pipe corrosion shown in Figure 3. 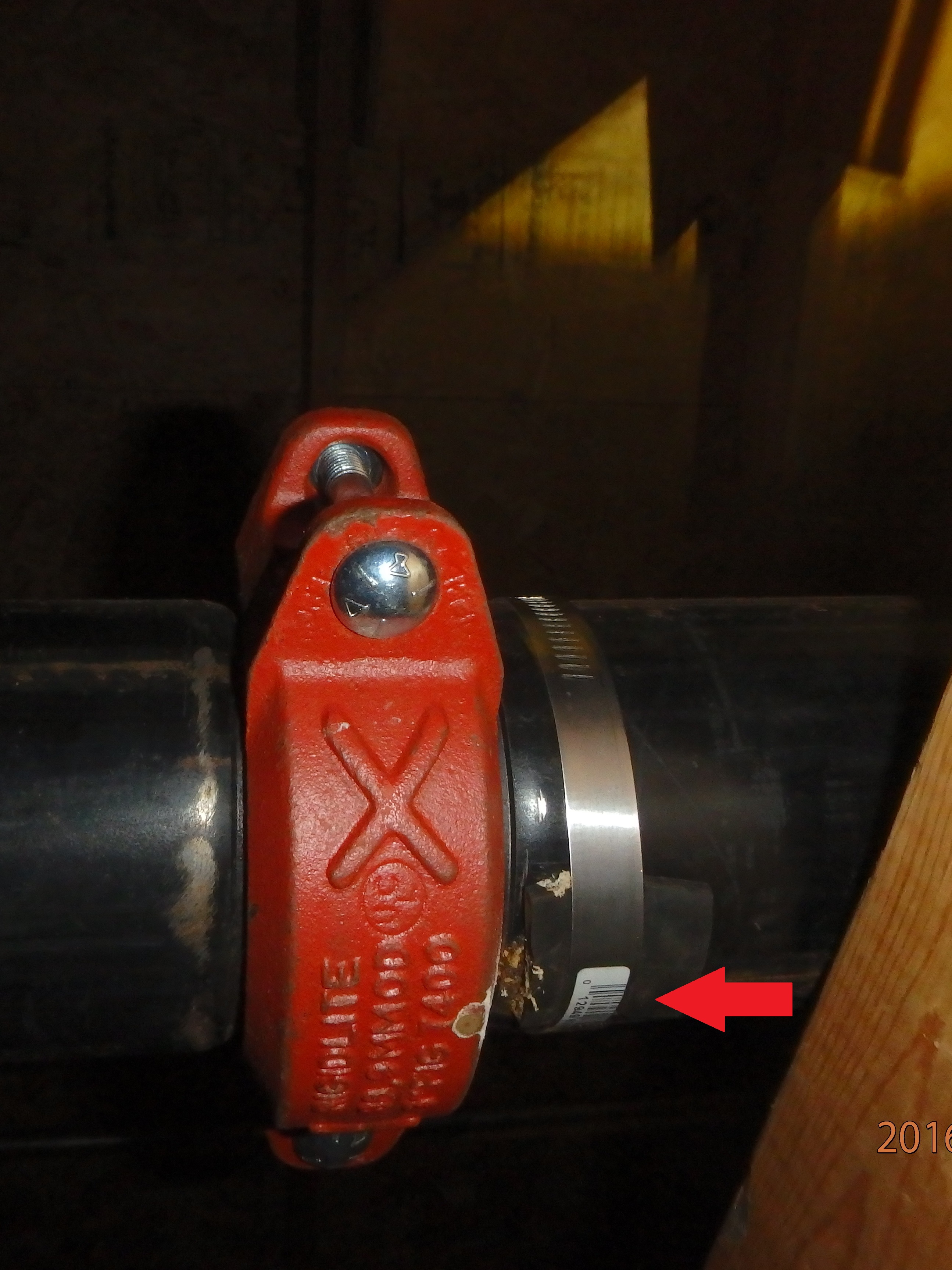 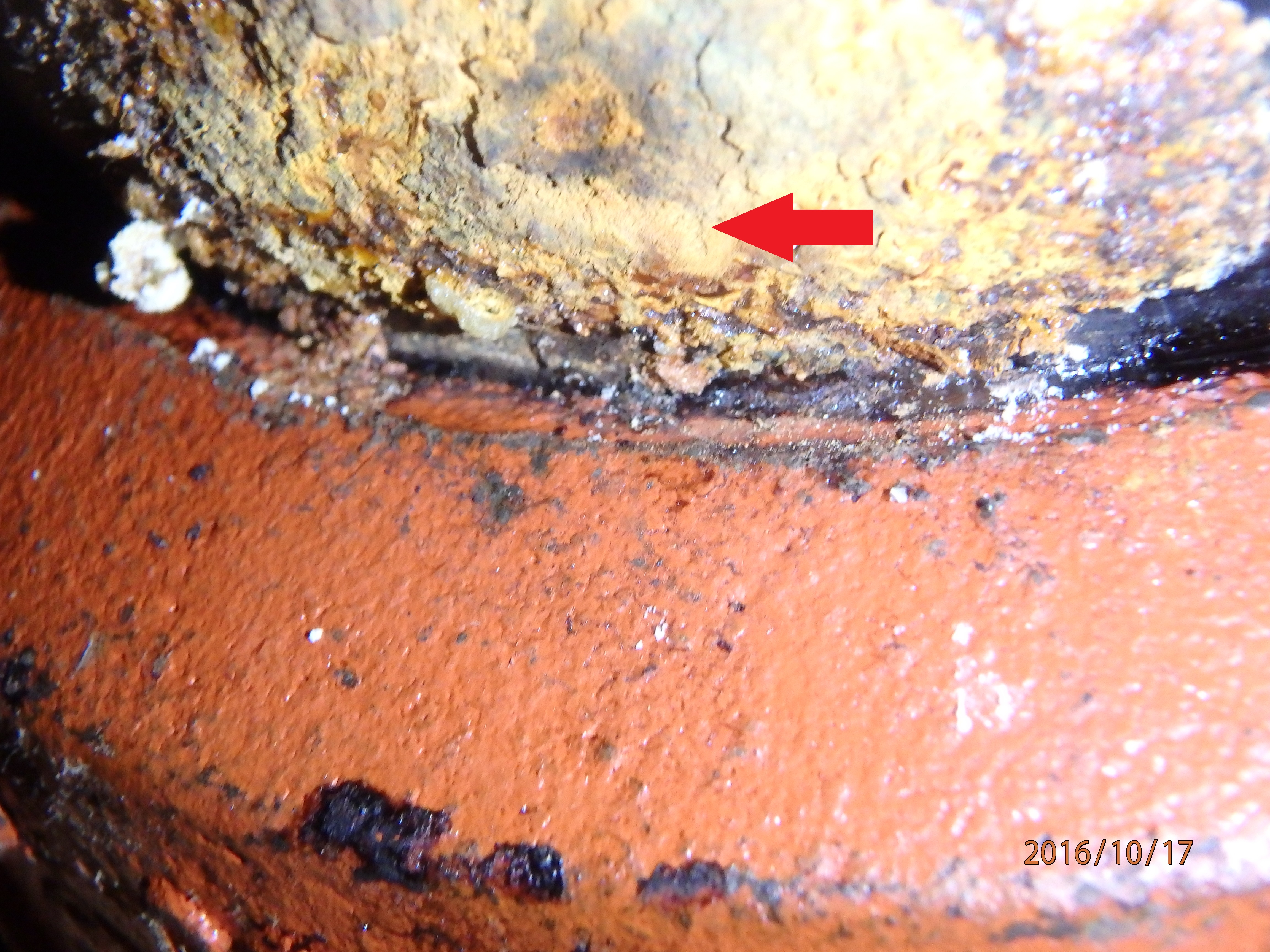 The pictures in Figure 3 show end-of-pipe corrosion and an active pinhole leak in a dry sprinkler system.  This pinhole leak was one of three found in a system that already had several inappropriate patches as well as had endured a freeze failure earlier in the winter. These examples of corrosion lead to the type of debris and sludge that is shown in the pictures in Figure 4 and are the telltale signs of corrosion that should lead the fire sprinkler system contractors to inform the building owners and operators of the serious problems associated with the sprinkler systems in their buildings. 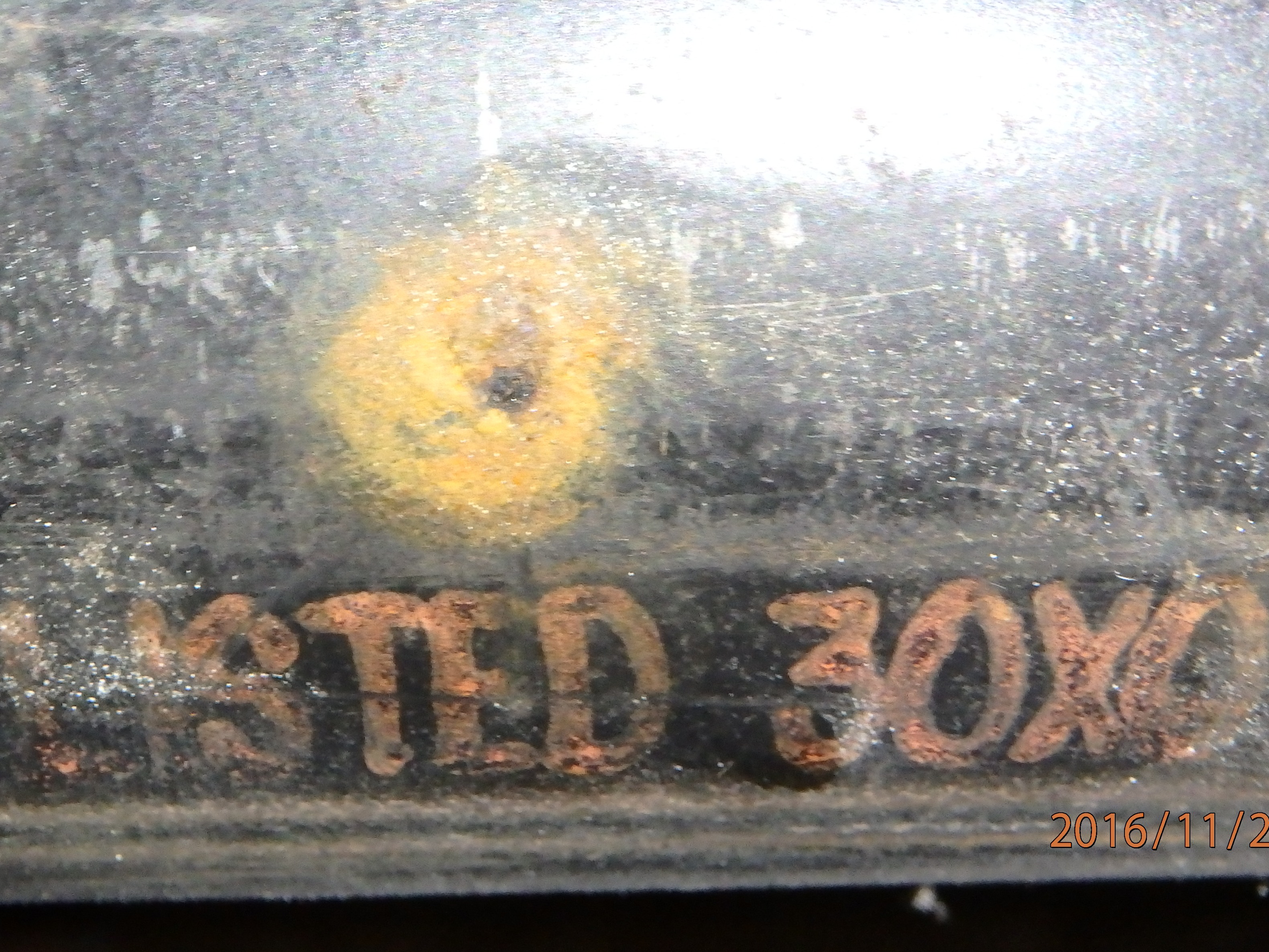 Two pictures of the corrosion debris from the building in the case study are shown in Figure 4 and this is some of what remained after the pipes had been removed from the attic, transported down three levels and deposited in the snow outside the building. 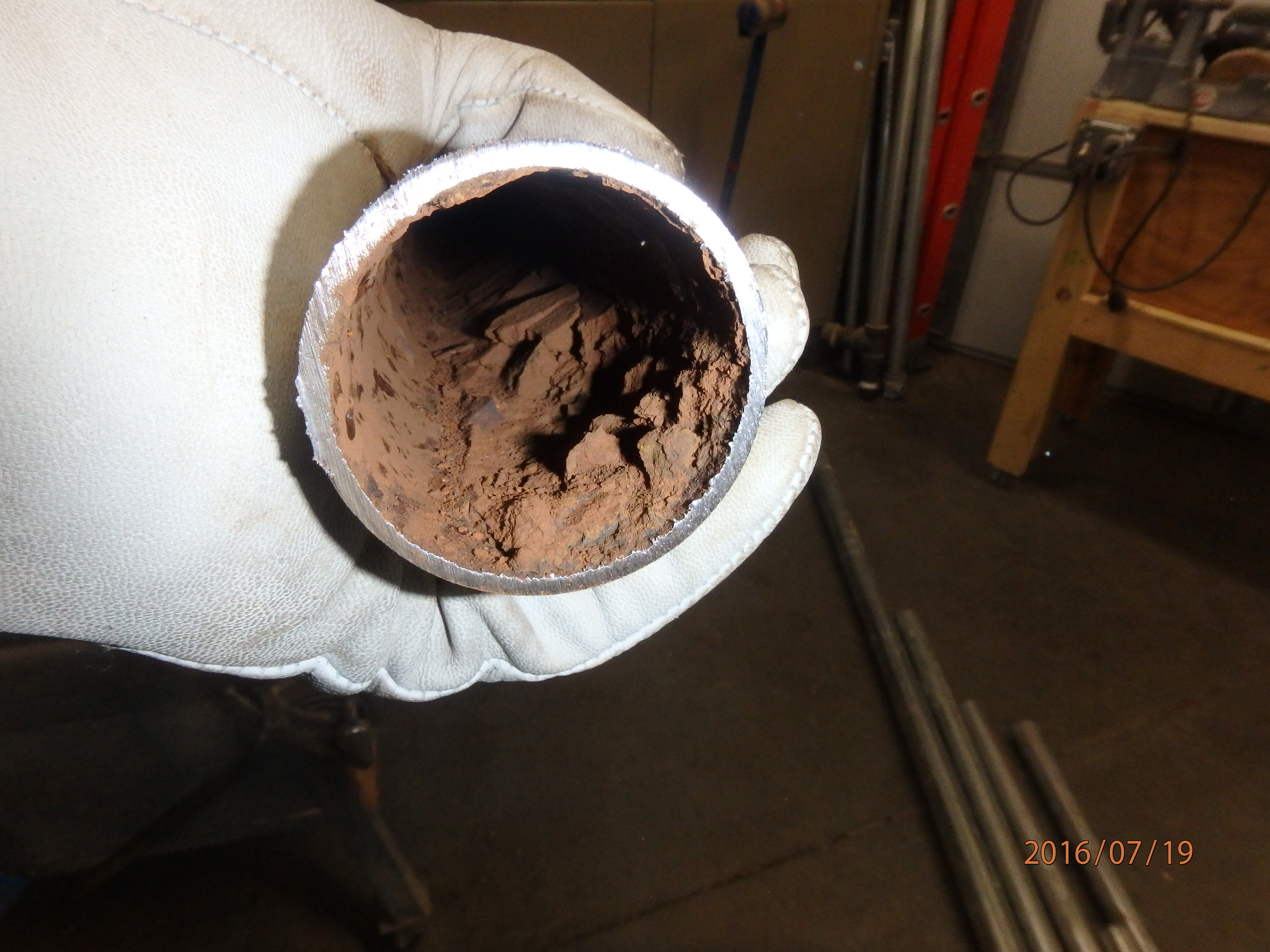 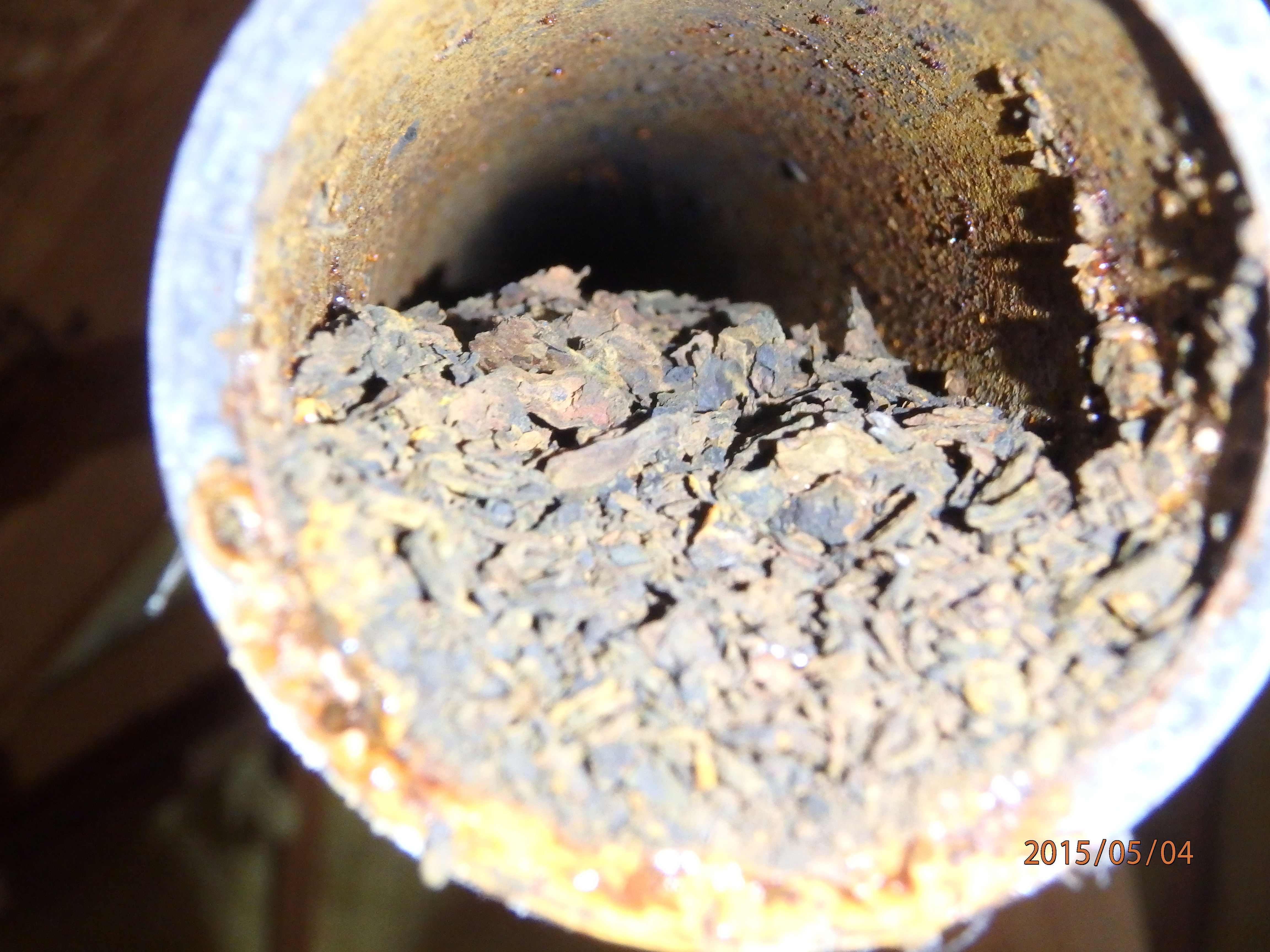 The nationally recognized and adopted codes (e.g. International Fire Code) and standards (e.g. NFPA 25, Standard for the Inspection, Testing, and Maintenance of Water-Based Systems and NFPA 72, Fire Alarm Code) require the owner of a building to be responsible for the inspection, testing, and maintenance of their fire protection systems.  What do most building owners know about fire sprinkler or fire alarm systems besides the fact they have them?  Building owners and managers rely on the fire protection contractors to keep the fire protection systems operating as originally intended to protect their building.  There isn’t anyone else that will be in their building to look at their systems.  I understand that sometimes fire inspectors make an annual visit, but this is most likely for fire prevention and to observe if a fire protection contractor is performing annual inspection, testing and maintenance.  The fire inspector is not there to verify system design or maintenance.

In this case study, the sprinkler contractor did not replace all of the main they were contracted to replace, and failed to warn the building owner that more money should be spent to investigate the possibility of corrosion and obstructions in the branchlines.  The building owner and the residents suffered water damage and were greatly inconvenienced; the insurance company paid money it should not have had to pay; and the sprinkler contractor made their profits from not only the partial pipe replacement, but also from the repairs after the loss that was caused by the contractor’s lack of professionalism and poor workmanship.

The lessons that can be and should be learned are:

There are case studies for under-designed sprinkler systems, for improperly designed fire alarm and fire suppression systems, and for passive fire protection systems that have not been designed, installed, or maintained properly. Many of these are never investigated or reported.

ABOUT THE AUTHOR: Scott A. Futrell, PE, FSFPE, CFPS, SET, CFEI, is a fire protection consultant with Futrell Fire Consult & Design, Inc., in Osseo, Minnesota and has over 40 years’ experience designing, specifying, and investigating fire protection systems. He is a Fellow in the Society of Fire Protection Engineers and co-author of “Designers Guide to Automatic Sprinkler Systems”.