Almost all newly built commercial or industrial buildings require automatic fire sprinkler systems for life safety, the protection of the property, the safety of the firefighters, and to minimize business interruption.  These systems are designed and installed as prescribed in the National Fire Protection Association (NFPA) Standard for the Installation of Sprinkler Systems or NFPA 13.  In the simplest form, these systems include a series of connected pipes and fittings, with valves, alarm initiating devices, and automatic sprinklers that are supplied by a reliable water supply.

For a sprinkler system contractor, the decisions relating to the design and installation of the automatic fire sprinkler system are made with input from many different sources.  These include the locally adopted fire and building codes, nationally recognized standards such as NFPA, the authority having jurisdiction (AHJ), the engineer of record, the architect, the construction manager, the general contractor, the insurance carrier and the owner.  The selection of the proper design choices requires research and forethought and should result in the application of education and experience to create the appropriate protection for the hazards present.  Of the many factors involved in the decision process, one important choice is the type of automatic sprinkler system that will be installed.  Some buildings may require more than one type of system. 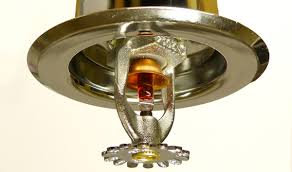 The selection of the proper design choices requires research and forethought.

The wet pipe sprinkler system is, in general, the most cost-effective, the most versatile as far as protection strategies and pipe installation are concerned, and the easiest to maintain.  Its cost effectiveness is based on its having fewer components, requiring less maintenance and testing and having fewer design restrictions than any of the other three types of systems.  Wet pipe systems are installed where temperatures will not fall below 40°F (4°C) and where one of the design objectives is to put water on a relatively small fire as quickly as possible.

In a wet pipe system, components are arranged in such a manner that, as soon as the heat from a fire operates the heat responsive element of an automatic sprinkler, the water is discharged through the sprinkler to the fire.  It is possible to design these systems for fire control – controlling a fire to the room or area of origin until the fire department arrives and extinguishes the fire; fire suppression – actually suppressing the fire; or life safety protection – as in residential occupancies.  The wet pipe system can also include additives such as antifreeze or foam concentrate.

Design issues relative to the wet pipe sprinkler systems would include the following:

A dry pipe system is similar to a wet system in that it consists of valves, pipes, fittings, alarm initiating devices, and automatic sprinklers; but the main difference is that the pipes are filled with compressed air or nitrogen, not water, and that the water is held back by a dry pipe valve.  When the heat from a fire operates the heat responsive element of an automatic sprinkler, the air in the system must be evacuated through the sprinkler opening to reduce the air pressure in the system holding the clapper of the dry pipe valve in the closed position.  When enough air has escaped through the sprinkler, through additional sprinkler actuation as the fire grows, or through quick opening devices that are installed on larger systems, then the water fills the piping, eventually reaching open sprinklers and the fire.  This delay of water application allows the fire to grow, creating more fire damage; that needs to be a consideration for both the designer and the owner.  The dry pipe system is a fire control system only, but may eventually be appropriate for life safety or residential systems

Following are some new or recent features that contribute to the effectiveness of dry pipe systems:

Design issues relative to the dry pipe system would include the following:

There are many types of detectors and detection systems that can be used with the preaction systems.  It is in the system designer’s best interest to work closely with the owner and the architect to utilize the type of detection system that is appropriate for each specific area or system.  An example of such an area is the data or computer room, where the products of combustion can do as much damage to sensitive equipment as the thermal damage from a fire or the resultant application of water.  In these rooms, an air sampling detection system may be more appropriate than smoke detectors.  The air sampling system may detect particles of combustion before the human eye or nose does and can send signals or warnings before there is actual smoke damage or a fire or before water is necessary.

A preaction system can be designed to operate as a dry system – non-interlocked, or more commonly they are designed to operate in conjunction with a detection system.  These include single-interlocked and double-interlocked systems.  The preaction system can be installed in areas or buildings where either wet or dry systems are appropriate based on temperatures, but where accidental discharge of water might be a critical issue, such as in areas that are protecting valuables, irreplaceable articles, freezers, or computer or data centers.

The advantages of a non-interlocked preaction system include the following:

Disadvantages of a non-interlocked system include the follwoing:

A single-interlocked preaction system allows water into the piping after the operation of a detection device, but will not allow water to enter the system if an automatic sprinkler operates or is accidentally damaged and broken or if a pipe or fitting is damaged or broken.

Advantages of a single-interlocked system:

Disadvantages of a single-interlocked system:

Advantages of the double-interlock preaction system:

Design issues relative to the use of preaction systems include the following:

Deluge systems are similar to preaction systems, in most cases utilizing the same valves, pipe, fittings, alarm initiating devices, automatic sprinklers, and detectors, although all of the sprinklers are open and do not include the heat responsive element.  Spray nozzles can be used in deluge systems instead of the open automatic sprinklers.  The difference between preaction and deluge systems is that with the sprinklers open at all times, neither air nor water can be maintained in the piping.  The deluge system requires a detection system to operate and signal the deluge valve, opening the valve and allowing water to flow through the piping and discharge through all of the sprinklers or nozzles simultaneously.

Deluge systems can be installed in warm or cold very high hazard areas and the primary objective is to put as much water on a fire as is required to contain or control a severe fire hazard as quickly as possible.  These systems are utilized where a large amount of water is necessary quickly such as in flammable and combustible dispensing operations, aircraft hangars, and transformers.  The deluge systems frequently include foam concentrates.

Design issues relative to the deluge system would include:

The type of sprinkler system must be determined early in the design process. That decision in turn has implications on the remainder of the system design, from hydraulic criteria to water supply and system components.  The owner’s or client’s operations, processes, and overall needs must be included in determining the type of system for a specific project.

Finally, long-term effects such as the cost of inspection, testing, and maintenance of the sprinkler and detection systems, as well as life expectancy of the pipe, fittings, and other components must be included in the overall evaluation.

ABOUT THE AUTHOR: Scott A. Futrell, PE, FSFPE, CFPS, SET, CFEI, is a fire protection consultant with Futrell Fire Consult & Design, Inc., in Osseo, Minnesota and has over 40 years’ experience designing, specifying, and investigating fire protection system related losses. He is a Fellow in the Society of Fire Protection Engineers and co-author of “Designers Guide to Automatic Sprinkler Systems”, available from the Society of Fire Protection Engineers.