In 1975 I left college and returned home to decide whether or not I wanted to continue down the path as a Civil Engineering student.  My parents, as most would, told me to find a job and within a few weeks I found employment with Blackhawk Automatic Sprinkler Company in Waterloo, Iowa.  Don Warner hired me as a sprinkler system designer (I really knew nothing about the industry) and I worked with Don and Carroll Mitchell (a fantastic superintendent and sprinkler fitter) for about four years.

Don gave me a copy of the ‘Red Book’, see Figure 1, and told me to read it, also gave me a warehouse project to ‘copy the sprinkler system’ so I’d learn it as I copied it.  I started with a blank drawing and drew the little circles, connected the circles, and really had no idea what those represented.  Someone else had designed the system and he thought if I copied it I’d better understand it.  Both of those tasks were quite boring for a third year engineering student, so I blew through them and ask for a project to design.

I designed a few systems and Mr. Warner decided he wanted to utilize hydraulic calculations to be competitive and we became aware of an engineering firm in Minneapolis, Minnesota, Edward H. Rouse, Incorporated, that would perform the calculations if you submitted them drawings.  We submitted drawings on a project or two and then I purchased a hydraulics slide rule.

Many of you reading this have never seen a slide rule, let alone a hydraulics slide rule, but we used slide rules in high school and my first year of college.  Mine was a National Fire Sprinkler Corporation ‘Fire Rule’, see Figure 2, and it was going to, and did, replace the friction loss tables. 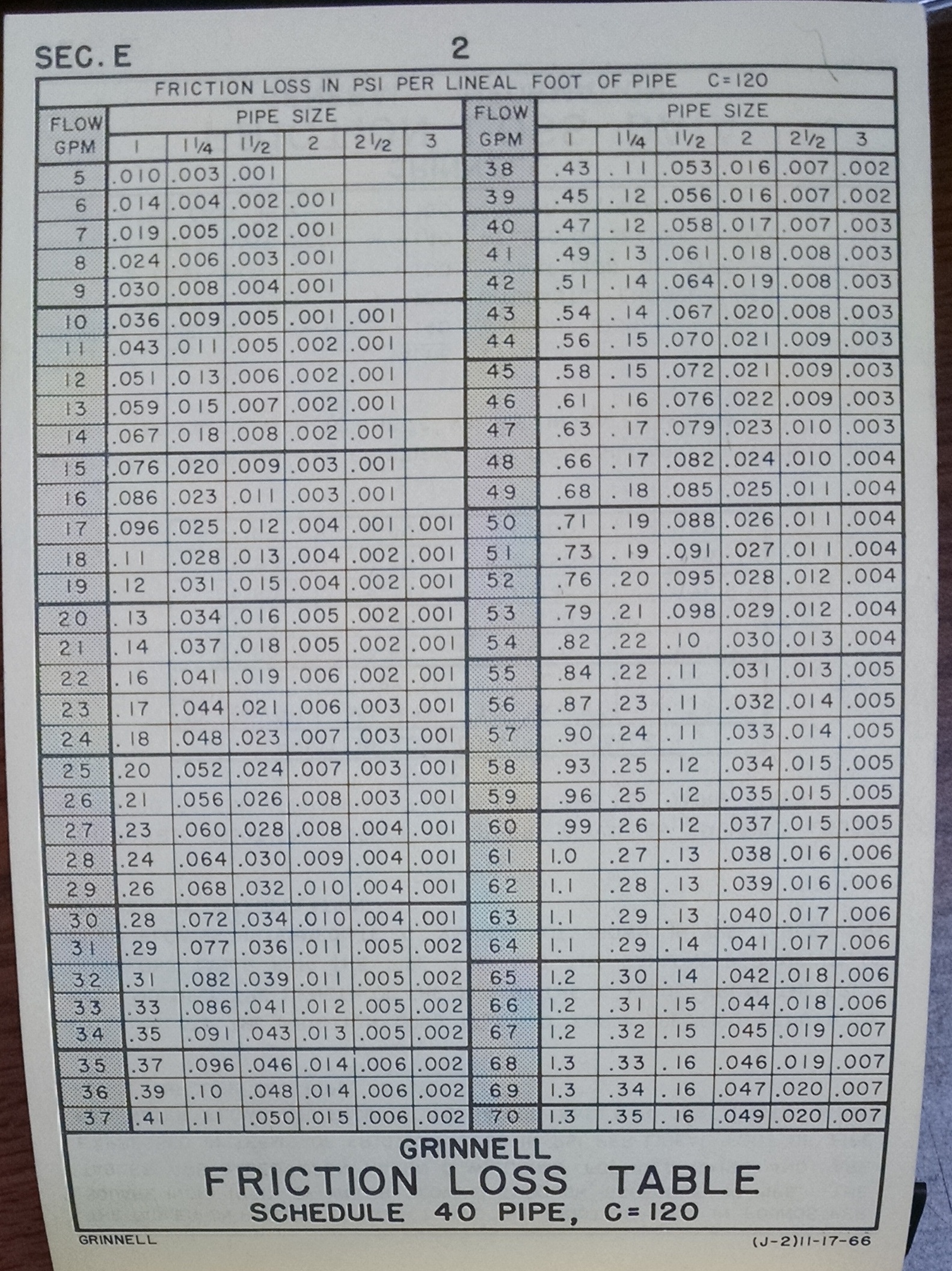 My first hydraulic calculations, with a slide rule and the 1975 or l976 National Fire Protection Association, Installation of Sprinkler Systems, NFPA 13, were small systems, but in 1976 I tried a gridded system calculation.  I submitted it the Edward Rouse firm for review and comment and for a fee they reviewed it, made a minor correction, and then, as their letter states, “Because of the low water supply we had to calculate real tight.” See Figure 3 for the first page of my hand calculation, for a gridded sprinkler system, using a slide rule. This calculation was dated October 20, 1976. 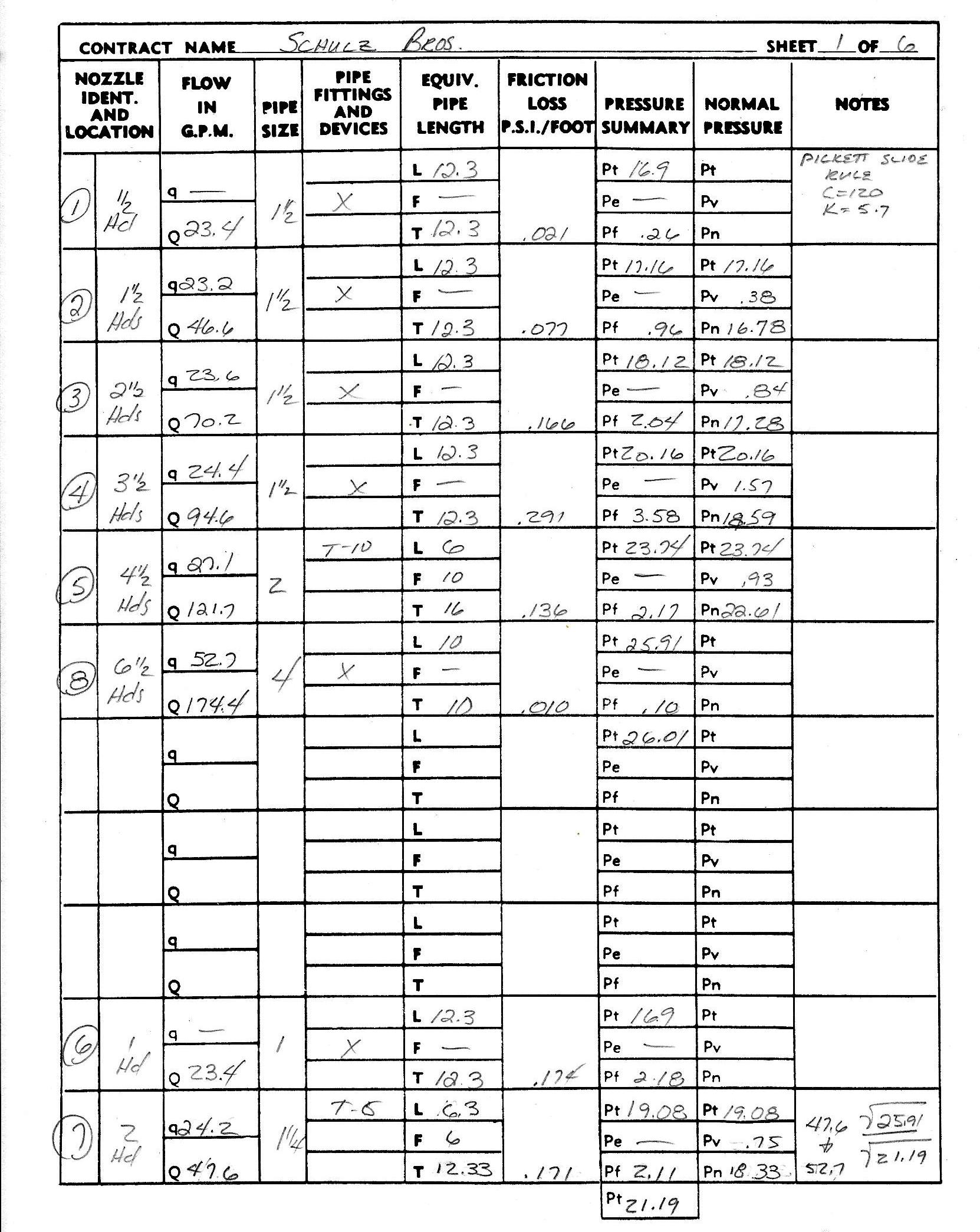 For those of you looking closely, I have the first sprinkler identified as one half sprinkler, where I guesstimated the split, operating at full flow and not splitting it.  That was the mistake they pointed out.  This was all a trial and error effort after this first sheet was completed.  You had to estimate, calculate, and compare every path in the grid to balance pressures at every junction.  This was tedious and mistakes were easy to make and carry through an entire calculation, only to start over and estimate again.  I would have to start over for my own mistakes, because the pipe I chose was too small, and because the pipe I chose was too large.  If I remember correctly, the calculation, one pass through, would take between one and two hours to complete.

Hydraulic calculation requirements in the 1975 edition of NFPA 13 were in Chapter 7 and included only seven and one half pages of material.  Of interest, relative to gridded systems was exception number 2 to 7-4.3.1 “For gridded systems, the design area shall be the hydraulically most remote area which approaches a square”.  However, in NFPA 13 – 1976 (yes, NFPA 13 was revised annually for a few years) a Tentative Interim Amendment changed the design area to the “…‘rectangular area’ having a dimension parallel to the branch lines equal to, or greater thank, 1.2 times the square root of the area…” that we use today.

In 1979 I moved to the Minneapolis area and went to work for Eagle Automatic Fire Protection Company.  There we purchased a Wang computer, state-of-the-art, and I began working with Mr. Alan Johnston at Hydratec, Incorporated.

Now, with four colleagues, we’ve written and present the Sprinkler Design for Engineers and the Hydraulic Calculation classes for the Society of Fire Protection Engineers.  The basis for my sprinkler system design, plan review, and teaching is the hand calculations I taught myself, using a slide rule, in 1975 and 1976.

ABOUT THE AUTHOR: Scott A. Futrell, PE, FSFPE, CFPS, SET, CFEI, is a fire protection consultant with Futrell Fire Consult & Design, Inc., in Osseo, Minnesota and has over forty years of experience designing, specifying, and investigating fire protection systems. He is a Fellow in the Society of Fire Protection Engineers, co-author of “Designers Guide to Automatic Sprinkler Systems” available from the Society of Fire Protection Engineers.